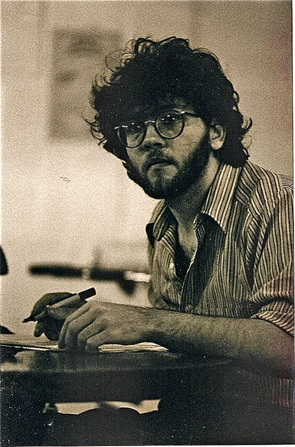 Ann Arbor, early 1980s
Larry O. Dean was born and raised in Flint, Michigan. As a young man, he worked with Academy Award-winning filmmaker, Michael Moore, published essays and reviews on popular culture in the alternative press, and also cartooned for fanzines and other underground outlets. He attended the University of Michigan, where he won three Hopwood Awards in Creative Writing, an honor shared with fellow poets John Ciardi, Robert Hayden, Jane Kenyon, and Frank O'Hara, among others; and Murray State University's low-residency MFA program. He teaches creative writing, literature, and composition as an English instructor, and works as a Poet-in-Residence in the Chicago Public Schools through the Poetry Center of Chicago's Hands on Stanzas program. He was a recipient of the Gwendolyn Brooks Award for teaching excellence in 2004.

After living in San Francisco for over a decade, he makes his home in Chicago.